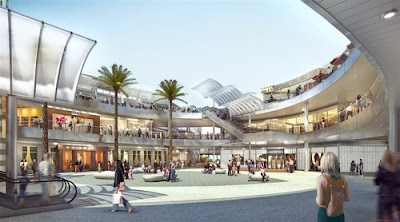 The new incarnation of Santa Monica Place, the Frank Gehry-designed shopping center that is getting a major makeover in downtown Santa Monica, will feature a broad plaza surrounded by curving walls that open both to the street and toward the beach.

With flourishes of curved shining material unwinding from a third-story plaza, the $155-million renovation will allow patrons to see the nearby ocean from its rooftop dining level, according to architectural drawings released Wednesday.


The mall's owners, who mostly demolished the original structure, say that upon completion the new center will differ vastly from its predecessor and sport a Bloomingdale's department store instead of longtime anchor Macy's.

Designed by noted Los Angeles architect Gehry early in his career, the old mall, completed in 1980, had an enclosed suburban-style configuration that was incongruously set in one of the most affluent urban shopping districts in the region.

The existing mall is about a block from the beach but does not allow shoppers to see the ocean or local streets. It was one of many inwardly focused shopping centers built during an era when owners wanted to lure customers into a self-contained bubble where there was little to do but shop.


The center's owner, the Santa Monica-based shopping center chain Macerich, launched the renovation in January. The new center, which was designed by the Jerde Partnership, is intended to connect with Third Street Promenade.