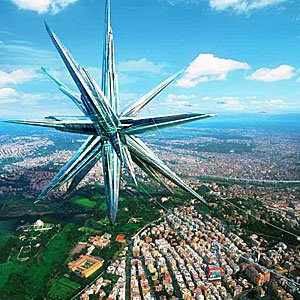 MAD Studio in China makes a statement with a design for a mobile, self-contained city.


VENICE, ITALY -- WHILE THE Venice Architecture Biennale remains the most anticipated and ambitious design show in the world -- not to mention the only one featuring cocktail parties in canal-side palazzi -- every edition is marked by a curious split personality. There is a core exhibition, organized by a single curator and displaying work by the leading names of the profession, and along with it a scattered collection of national pavilions filled with designs by mostly anonymous younger architects. Because the pavilions vary so much in quality -- and theme -- they always knock the central exhibition at least a bit off message.

Rarely, though, has the gap in tone between the two sections been as wide as it is this year. The main show, organized by American-born Aaron Betsky, manages to be unsure of itself, divided against itself and pleased with itself at the same time. Its biggest gestures -- at the start of the exhibition, inside the cavernous old shipbuilding complex called the Arsenale -- come from a parade of celebrity architects, including Zaha Hadid, Elizabeth Diller + Ricardo Scofidio and Frank Gehry, nearly all of them playing down to the moment with overscaled, underwhelming work. A separate section on experimental architecture, which Betsky prepared with a young Italian curator, Emiliano Gandolfi, has the opposite problem. It is dense and unwieldy, a thicket of projects containing a handful of stirring moments but no clear theme.