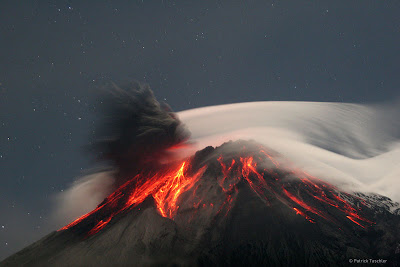 Explanation: Volcano Tungurahua erupted spectacularly in 2006. Pictured above, molten rock so hot it glows visibly pours down the sides of the 5,000-meter high Tungurahua, while a cloud of dark ash is seen being ejected toward the left. Wispy white clouds flow around the lava-lit peak, while a star-lit sky shines in the distance. The above image was captured last year as ash fell around the adventurous photographer. Located in Ecuador, Tungurahua has become active roughly every 90 years since for the last 1,300 years. Volcano Tungurahua has started erupting again this year and continues erupting at a lower level even today. Some truck-sized boulders landed more than a mile away.

I think this is among the most significant info for me.
And i am glad reading your article. But should
remark on some general things, The web site style is great,
the articles is really nice : D. Good job, cheers

Hi there! I know this is somewhat off topic but I was wondering if you knew where I could locate a captcha plugin for my
comment form? I'm using the same blog platform as yours and
I'm having difficulty finding one? Thanks a lot!

Thanks a lot and I'm taking a look ahead to touch you.
Will you kindly drop me a mail?

Thіs really would remind each other that although you'rе much aside, the
love and treatment are still there. In times that you
are apart from eaсh other, always be in touch and. This made him expect you to beg him
tο want you again.

You need to now have the Cydia software in your iPhone,
iPod Touch, or iPadis home monitor.