There's more than one way to make things disappear 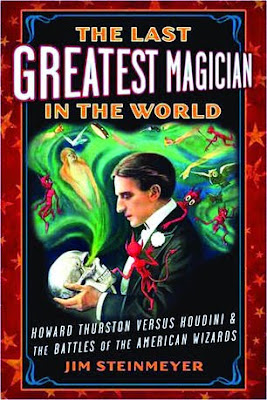 Houdini’s legend still lives today, but Howard Thurston’s may have been resurrected with author Jim Steinmeyer’s latest biography, “The Last Greatest Magician in the World: Howard Thurston Versus Houdini and the Battles of the American Wizards.”


Steinmeyer tells the story of Thurston beginning from the magician's days as a 12-year-old runaway, to when he hit rock bottom after a covered-wagon accident here in Utah, to his booming success as “The World’s Greatest Magician.”

Thurston fled from an abusive home as a boy and train-hopped from city to city in the Midwest selling newspapers before finally making his way to New York. As a teenager he earned a living as a pickpocket. After spending time in a reform school, Thurston decided to pursue a career in magic. Thurston, a master of sleight of hand, began his career performing card tricks with traveling vaudeville shows. Eventually, he created his own show that became so enormous that it took eight train cars to accommodate the 40 tons of props and actors.

Steinmeyer, a historian of magic and creator of illusions, uses his knowledge of the world of magic to portray in detail how Thurston’s illusions were performed. Steinmeyer’s insights give detailed information on mechanical devices used to perform the tricks to the roles of the magician and the members of his cast.

Steinmeyer is also frank in his portrayal of Thurston and doesn’t shy away from his shady dealings conning people in the early days of his career, his abusive relationship with his first wife or his financial dependence on his brother, who made his money in dime museums and hoochie-coochie shows.

Steinmeyer’s “The Last Greatest Magician in the World,” not only captures the life of Thurston and the world of magic in the early days of the 20th century, but it vividly portrays the period in the American entertainment industry and how magicians and other showmen had to adapt to the increasing popularity of motion pictures.

"The Last Greatest Magician in the World: Howard Thurston Versus Houdini and the Battles of the American Wizards﻿," by Jim Steinmeyer, Jeremy P. Tarcher/Penguin Books, 377 pages, $26.95 (nf). For more information, click on the heading above.
Posted by Arthur Eades at 4:37 PM